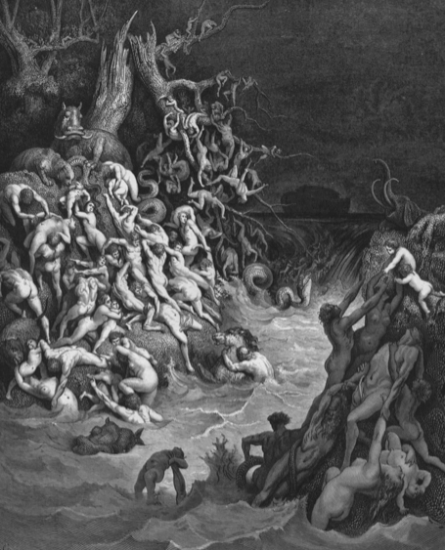 People think the story of Noah and his ark is a cute children’s story. We retell it in illustrated children’s books. We make toys of the ark and its collection of animals.

I find the story of Noah, however, to be one of the scariest in the whole Bible. We should think twice—or maybe three or four times—before reading it to young children.

The story tells of an effort by God to scrub the earth of evil through a catastrophic flood. God wipes out all mankind, except for the righteous Noah and the seven members of his family.

When we think clear-headedly about this story, we are reading about an act of global genocide. God literally wipes out all humanity, except for a very minute chosen few. Other acts of genocide in human history pale by comparison.

So you want to read this story to your children? If children are already scared about powerful forces that affect their lives, forces they cannot control, do we want them to think that God caps them all? No, the story of Noah’s flood is not simple child’s fare.

So why is this story in the Bible anyway? How does it square with standard Christian teaching that God is a God of unconditional love? I’ve been asking myself that question ever since the full import of the story hit me some years ago.

Here’s the answer I’ve come to for myself. First, I don’t read the story as a historical account. If the story has its origin in some historic flood in the ancient world, that historic event has been clothed in the mists of myth. The story was clearly a myth in the world of ancient Sumer. There the Hebrew writers probably first encountered it.

But that brings us back to the first question. Why do the Hebrew writers include this story in the book of Genesis? What does it contribute to the Bible’s whole story?

God sees how the good earth that God created has been defaced and defiled by the violence of human beings. He determines to cleanse the earth by removing all the evil human beings who have been responsible for that corrupting violence.

God’s solution to the evil of human beings is to literally cleanse the earth of these evil beings through a massive extermination. Then maybe peace and wellbeing can be restored to the globe. And so comes the great flood, a kind of universal bath to scrub away evil.

But this massive bath does not cleanse the world of evil. When the survivors emerge out of the ark, the text (Genesis 8:21) quotes God as saying, “I will never again curse the ground because of humankind, for the inclination of the human heart is evil from youth.” Consequently God transforms the bow of destruction into the rainbow of blessing.

God seems to learn that the root of human evil lies in the human heart. It cannot be eliminated, therefore, by any form of literal extermination. The solution to the evil of the human heart must be a transformation of that heart.

And so Genesis leads us forward to chapter 12 where God calls Abram out of Ur to follow God’s call by faith. We are launched into the Bible’s grand story of redemption, which for Christians culminates in the life, death, resurrection, and ascension of Jesus.

The telling of the story of Noah’s flood then becomes the way that the Biblical story recognizes the vanity of all forms of social cleansing.

Sometimes we ask why doesn’t God intervene into the world and sweep away all evil people in one swath of his sickle of judgment. Let the righteous prevail. But the story of Noah’s flood suggests that such radical acts of judgment, such acts of genocide, are never the solution to evil, even if God is the one doing it.

Now don’t misunderstand me. I am not saying that the myth-clouded story of Noah’s flood is telling us something literal about how God learns a lesson. But it does have a theological lesson to teach us. And that is that if social cleansing does not work for God, it will not work for human beings either.