Why I wrote this book and what you can expect from it. 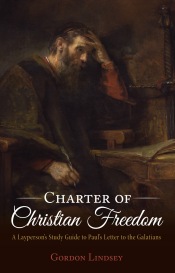 As I announced in my last posting, the publishing house Wipf and Stock has released my new book: Charter of Christian Freedom: A Layperson’s Study Guide to Paul’s Letter to the Galatians. I offer this short Q&A as a way of explaining why I have written this book and what you may expect to find in it:

Q. Why have you written this book on Galatians?

A. Because it is one of the most influential literary works written in Christian history. It redirected the course of apostolic Christianity. It has sparked many reform movements in the church, including the Protestant Reformation. It gave teeth to campaigns in the twentieth century to ordain women. And it has revolutionized my own spiritual life.

Q. There are many commentaries available on Galatians. Why another?

A.This book started out in response to a request from a minister friend who was teaching a men’s Bible study class. He was frustrated in finding suitable study materials for the class. His men shied away from academic volumes, but also found most Sunday school materials too simplistic. They loved William Barclay, but found him dated. Having read my blog, he challenged me to write something for his men that had substance but avoided academic jargon. This book is written to be just that kind of study resource for laypeople studying the Bible and for working pastors.

Q. How do you approach the Letter to the Galatians?

A. Too many people read the Bible in isolated snippets. I read books of the Bible as literary works, paying attention to the flow of the whole work and its historical, canonical, and literary contexts. The tools I use to read the Bible are ones I first learned in a college class on poetry writing. I discovered in the class that I was not a great poet, but I did learn how to read a literary work closely. I have transferred those tools to reading the Bible, including the Letter to the Galatians.

Q. In a nutshell summary, what is the basic message of Galatians?

A. Galatians is a kind of polemical pamphlet. Paul wrote it to address a controversy roiling the apostolic church. On what basis could Gentiles be accepted into a religious movement that was originally Jewish? Paul says they are to be accepted on the same basis as Jewish Christians: by faith in Jesus Christ. They are free from adopting Jewish identity markers. They can be Christians as Gentiles rather than as Jewish converts.

Q. That sounds as if Galatians is an obsolete tract dealing with an old, by-gone controversy? Why study it today?

A. The way Paul addresses that old controversy has spoken powerfully to Christians ever since. Paul does not see the Christian life as one of following iron rules of morality and religious practice. Instead we are called to sink deep roots into the Holy Spirit. In turn the Holy Spirit will bring about a transformation of our lives. It is a way of living freely. And I find that is a clarifying message we Christians need to hear once again today.

Q. If that’s the case, how has your study of Galatians changed your own life?

A.  I grew up in a legalistic version of Christianity focused on identifying and avoiding sins. It nurtured a joy-killing spirit. I hated it. But when I came to read Galatians and understand the import of what Paul was saying, I realized how wrong I was in the vision of Christianity I carried from my childhood. Galatians truly revolutionized my spiritual life. That’s one reason I wrote this book–to help others discover this same liberating message.

Q. Do you have a favorite passage in Galatians?

A. Yes, it is verse 5:13, which reads: “For you were called to freedom, brothers and sisters; only do not use your freedom as an opportunity for self-indulgence, but through love become servants to one another.” Paul expresses a fundamental paradox in Christianity. Freedom is experienced in service. Now that turns our normal expectations upside down.

I am pleased to announce that the publishing house Wipf and Stock has released my new book: Charter of Christian Freedom: A Layperson’s Study Guide to Paul’s Letter to the Galatians. You can order copies from the Wipf and Stock website. It is also available through Amazon. Amazon will release a Kindle e-book version later in the spring.

I have written this book to help make the Letter to the Galatians more accessible to people who do not have a theological education, for Bible study group leaders, and working pastors. The apostle Paul’s Letter to the Galatians has had a deep impact on Christian theology and practice, far beyond its short length. It has inspired great Christian thinkers; it has also sparked reform movements.

Its message, however, can be hard to follow for the average reader. This study guide seeks to open up this important Christian literary work. First explaining the crisis situation Paul was addressing, I clarify the flow of Paul’s argument so the average reader can grasp its revolutionary import. Paul’s letter sparked a revolution in my own spiritual life. And I hope this study guide can help do that for others as well.

Here is what two former seminary presidents are saying about my book:

Gordon Lindsey’s knowledge of Scripture is breathtaking. His ability to bring it to life is on full display in this wonderful treatise that reads like a novel. . . . I predict this book will become a staple in Bible study leaders’ and preachers’ libraries, not just on the shelf, but open again and again, unpacking the gems hidden in one of Paul’s most important letters.

Bible study for adults is often an uphill climb. Teaching a Bible study for adults is equally arduous. Often there simply isn’t material accessible to lay readers. Fortunately Lindsey has given us a lively and insightful guide to the Letter to the Galatians. He brings a lifetime of teaching experience to his examination of Galatians—the short but enormously powerful ‘charter of Christian freedom.’ Spoiler alert: this book can change your life.

I invite you to read my book and discover whether it changes your life as well.

As bedtime reading, I’ve been reading recently a collection of letters written by the late Senator Daniel Patrick Moynihan. In a memorandum he wrote to Harry McPherson in May 1965, he wrote something that I have been chewing my mental cud on ever since:

American democracy is founded on the twin ideals of liberty and equality. Our education and general mindset does not much distinguish between these two ideals, but the fact is that they are distinct…Liberty has been the American middle-class ideal par excellence. It has enjoyed the utmost social prestige. Not so equality. Men who would carelessly give their lives for Liberty, are appalled by equality…Lincoln freed the slaves, but did not give them equality. Therefore we are still struggling with the issue. [Steven R. Wiesman, editor, Daniel Patrick Moynihan: A Portrait in Letters of an American Visionary, New York: Public Affairs, 2010, pages 103-104]

I confess that I like most Americans have tended to merge the ideals of liberty and equality in my own fuzzy mind. Moynihan has helped me see how different they are, and how they provoke very different political and social aims.

As I read Moynihan, I began to ask: How do these two ideals come into the New Testament picture of the Kingdom of God? Do they come into that picture at all? Or are we importing two secular ideals into a spiritual world?

In the Letter to the Galatians, we get Paul’s ringing proclamation of the great Christian ideal of spiritual liberty. “For freedom Christ has set us free,” cries out Paul. (Galatians 5:1) And middle-class American Christians will heartily endorse Paul here. It fits well with our own attachment to the virtue of freedom.

But what about economic or social equality? Is that a part of the New Testament picture of the Kingdom? Here’s where I’m haunted by the parable of the laborers in the vineyard that Jesus tells in Matthew 20. A farmer goes out into the village marketplace and hires laborers to help bring in his harvest. Laborers are hired all through the day. Some work eleven hours; others just one. But all are paid the same wage.

What a picture of radical equality! All receive the same reward. And most of us grumble. We like the laborers who worked the longest feel this is unfair.

Yet…does that exhaust the point of Jesus’ parable? Could Jesus also be saying something pointedly about God’s kingdom being a way of life that assumes a radical social and economic equality among the children of God? It is after all told in Matthew as one of Jesus’ responses to the rich young ruler who goes away sorrowful when Jesus invites him to sell all he has and follow Jesus.

If such equality is a distinctive feature of Jesus’ understanding of the Kingdom of God, then we must say Christians in general (and not just middle-class American Christians) have had a very hard time accepting this ideal. Social and economic equality has been a rare feature of most Christian communities. It has been an important ideal in the monastic tradition. But even in monasticism, the record of implementation is decidedly mixed.

It also raises questions about what political, economic, and social policies Christians should throw their support behind. That should give us pause as we listen to the various options thrown out to us in the upcoming political campaigns.

I invite your own thoughts on this.