Sometimes, when reading the Bible, we encounter a word, a phrase, or a sentence that seems so ridiculously simple. We read it and move on, giving it no further thought. But if we stop to pinpoint its meaning, what had seemed so simple becomes ambiguous. It possesses layers of meaning.

One classic example is the sentence fragment that opens the Gospel of Mark: The beginning of the gospel of Jesus Christ, the Son of God (Mark 1:1). It sounds simple and straightforward. That is, until we try to understand what the author means by the word beginning. Just what does constitute the beginning of his gospel?

I contend that there are at least four possible ways of understanding that simple word.

1) The sentence fragment may serve as a book title. Ancient books did not have titles like published books today. When people made reference to a particular book, instead of naming its title they would quote its opening word or words.

For example, in English Bibles, we give each of the five books of Moses a title: Genesis, Exodus, Leviticus, Numbers, and Deuteronomy. In the Hebrew Bible, however, their titles are the opening words of each book. Genesis is not called Genesis but Bereshit (In the beginning), which is the opening word of Genesis in Hebrew.

Mark may intend the opening fragment of his gospel to serve this purpose. He is telling his reader that he is herewith beginning to  tell  the gospel of Jesus Christ.

2.  When we notice, however, what immediately follows this opening fragment (Mark 1:2-8), we find Mark quoting a passage out of the Old Testament prophet Isaiah. Maybe Mark wants us to see this quotation as the beginning of the gospel of Jesus Christ.

This may be a way Mark signals to us that the gospel of Jesus Christ really begins in the Old Testament. The Old Testament story of Israel is the necessary preparation for the coming of the gospel.

3) I always believe that it is essential to pay attention to context when trying to interpret an isolated phrase or sentence in a Bible passage. The opening of Mark is no exception.

If we pay attention to what follows the opening fragment (again Mark 1:2-8), we find it is not only a quotation from the Old Testament, but also the story of the coming of John the Baptist and his ministry of baptism in the desert. In fact, the quotation from Isaiah serves to leads us into this ministry.

Christians have ever since acknowledged the crucial role of John in launching the Christian movement by giving him the title the Forerunner. In Orthodox iconography, like the mosaic of the deësis in Istanbul’s church of Hagia Sophia, John always stands to the immediate left of the central icon of Jesus. 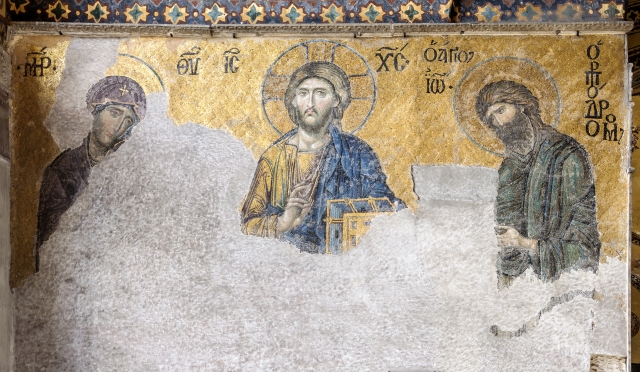 4) The final possible meaning requires looking upon the whole of Mark’s gospel as the context for its opening sentence fragment.

Scholars have longed noticed that in the manuscript tradition the gospel of Mark has ended oddly. In the earliest manuscripts it ends with chapter 16, verse 8. Scribes added verses 16:9-20 to the gospel only centuries later.

So Mark’s original text appears to have ended with the resurrection of Jesus proclaimed by a young man (an angel?) to the women at the tomb. But oddly Mark’s gospel contains no appearance of the risen Jesus to the disciples as do the other three gospels. Instead the young man tells the women that the risen Jesus will go before his disciples into Galilee. There they will see him (Mark 16:6-7).

But Mark never records that appearance in Galilee. Why? That’s one big puzzle in studying Mark.

It is important, however, to recognize what Galilee represents in Mark’s gospel. It is not the Jewish heartland. Judea and Jerusalem are that. Galilee is more of a borderland. Its populace mingles Jews with Gentiles. To a Jewish purist, it is therefore a place where one might risk religious contamination.

Now which of these possible interpretations does Mark have in mind when he writes The beginning of the gospel of Jesus Christ, Son of God? Is it possible that he does not have just one of these meanings in mind? Is it not possible that that simple, but ambiguous sentence fragment embraces all four?